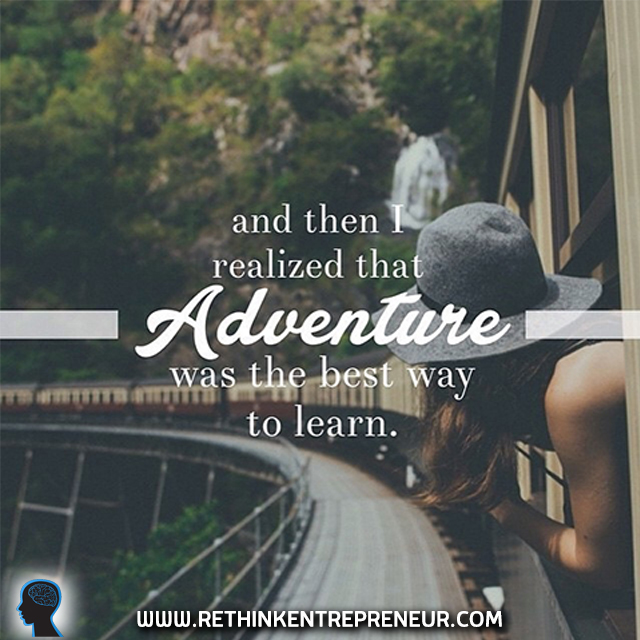 We were naturally curious and creative in our younger years. In hindsight, we made connections that were hilarious. We made up stuff effortlessly.

In fact when we’re young, our mind is filled with fiction and fantasy. Every day can be an adventure. I certainly remember some of my pretend worlds with pretend characters where of course, I was the pretend hero.

It’s true that there comes a point when we have to learn to separate fiction from reality. But as we are made fun of for having our head in the clouds, we soon learn to be ashamed of our creative side.

Meanwhile, our brain matures, our worldview solidifies and we vilify our innate creativity further.

However if the force is strong with you (I mean if creativity is abundant within you), it will eventually spew out one way or another, uncontrollably at times.

Your attempts to roll with it may feel awkward while to try to reconnect with your creativity but remember this: if you were creative once, you can be creative again.

2) Being impatient with yourself

When we were young and running around, like the unassuming creative powerhouses that we were, we had a lot of time to ourselves. Time to dilly dally, indulge in daydreaming and anything that took our fancy.

Chances are that, you don’t have that freedom right now. School, work, adulting, responsibilities restrain the amount of time you can devote to anything .

I used to be decent at drawing in my youth, even made comic strips. The last time I tried, I struggled (despite having a model to copy, look at how strange my shark is!) I’ve regressed somewhat. It would take time and practice to regain the level I had back in the day.

Whatever your art, view it as a muscle. If you don’t use it for a time, it gets weaker. (Remember that one time you came back to the gym after quarantine?) You have to exercise for a while to get your muscle back to its former strength. It won’t happen overnight. If you overdo it at first, you can end up hurting yourself.The key is little, and often (not all or nothing)

3) Comparing yourself to others

You may have heard the saying… Comparison is the thief of joy.Why do we engage in creative pursuits? Isn’t it first for the sheer joy of it? Express something both personal and beautiful? So why invite kill-joys?

One of these is that inner critic comparing us to a seasoned creative.

It’s important to learn from the great but equally important to find your own groove. That will take time. Every expert was once a novice. Being a novice is a necessary rite of passage.

What if the person we compare ourselves to is someone we consider to be on our level but has seemingly more talent and /or success than us?

If it goes beyond studying what works and bleeds into self-doubt, paralysis or plagiarism, STOP!

Find your voice, your groove, your unique style. Create to express, not impress.

You are on your own journey, leading to your very own destination.

4) Lack of faith in your ability to learn

Myths survive in the collective psyche long after they have been debunked. We find it hard to let go of long-held beliefs. It’s human.

It took quite a few years for the spontaneous generation idea to die, even after it had been proved unscientific.

Some of us hold to the belief that, just as old dogs can’t learn new tricks, there is an age limit to being able to learn new things. It’s probably based on the belief that once we reach adulthood, we don’t produce more brain cells and they slowly die. This is what science told us once.

This belief has however been proven wrong. We can produce new brain cells way into adulthood. We can get smarter! The real problem we encounter is that we stop stimulating our brain and therefore discourage neurogenesis.

As we age we become self-fulfilling prophecies. We stop exercising. We stop trying to keep up with the world. We stop challenging ourselves. It’s no wonder our brains and bodies deteriorate faster!

It’s never too late to learn a new skill, take up a new hobby, even reinvent oneself; so rekindling an old talent should be well within reach.You just have to want it.

5) The wrong sort of interruption

All interruptions are not created equal. Sometimes if we have been focusing on something for too long, our cognitive performance decreases. A little break can be what our brain needs to get back into gear.

But there is another sort of interruption. I hate it with a passion.

It’s when you are actually engrossed in whatever you are doing. You are in flow, getting things done. Then the phone rings, you receive an email, a text or worse, someone shows up at your door.

There’s little you can do about the last example (well, you could pretend you’re not home, but you never heard this from me 😅)

However, if you are going to work your craft and get really creative, you would be working against yourself if you allowed trivial things to prevent you from being and staying in the zone. It takes an average of 20 minutes to get in that state. Once you’re there, maximize it. It usually peaks at 45 minutes. So the consensus is to block out 90 -120 minutes of uninterrupted time. Put your devices on a setting that won’t distract you.

In conclusion, wherever you are on your creative journey, remember you started life being creative. Allow yourself to gradually reconnect with your old self, enjoy the process, get in the zone and let nature run its course.

Have you experienced this too? When you set out t

◾Starting can be the most difficult thing.😔

◾This must be one of my favourite quotes because

Nature does not hurry, yet everything is accomplis

Autumn is a second spring where every leaf is a fl

I don't think I've been more active on my grind an

"Live out of your imagination instead of out of yo

Begin typing your search term above and press enter to search. Press ESC to cancel.